On Wednesday, January 27th, the Center launched “Speech Spotlight Live,” a series of virtual events that will serve as an extension of its existing Speech Spotlight series. Each event will feature a conversation between Executive Director Michelle Deutchman and one or more experts to examine the pressing topics in speech and civic engagement in higher education.

We kicked off the series with University of California President Michael V. Drake. As the 21st president of UC’s world-renowned system of 10 campuses, five medical centers, three nationally affiliated labs, more than 280,000 students and 230,000 faculty and staff, President Drake faces a wide range of questions about expression and engagement on campus:

– How do we capitalize on the momentum of student participation in the November election?
– How does UC balance First Amendment freedoms with its commitment to diversity and inclusion?
– What is the relationship between speech and science?

The dynamic conversation with President Drake addressed these topics and more. 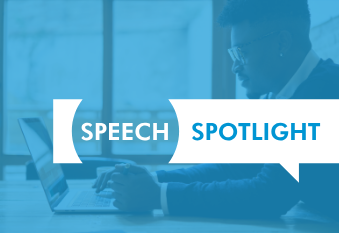